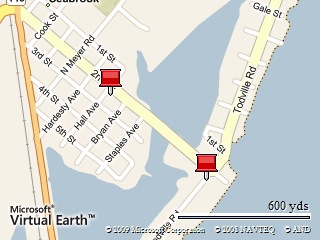 It was a chilly start to the morning. It was in the low 40’s with winds around 15 knots with gust to 20. I met Mark Zimmerman at Skipper’s (a local family-owned restaurant in Clear Lake Shores) for breakfast. This was my first time to visit Skipper’s since Ike came through. Glad to see that they reopened. After their normal excellent service, we went over to the Seabrook boat ramp and signed up for the event. 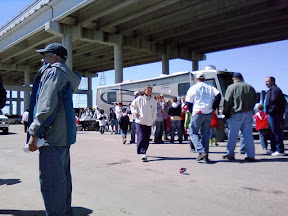 More people showed up than what I was expecting. Several school and scout groups volunteered to help. All in all I think that a couple hundred people showed up. Our group had about 20 people in it. We started work on 2nd Street from Todville Rd. to the pavilion (about 1/3 of a mile). We ended up with several trash bags full of trash and debris along with several piles of larger items. Some of the more notable items included stuffed animals, several tires, sailboat mast, trash cans, and paint cans. The largest item that we were able to get out was a dishwasher and kitchen sink with the dishes still in the dishwasher.

It was amazing the amount of large items still needing to be moved. There were several cars still in the water and chain link fences. We even found an HVAC unit next to the waters edge. Unfortunately it was too heavy for us to remove. It has been 6 months since Ike hit and Seabrook is still recovering. One of the organizers said that there has already been 146 tons of debris removed from Seabrook. That is just one small community that was affected by Ike. Places like Bolivar will take a couple of years to completely recover.

I read a blog from the Orlando Sentinel about the accident report from the Florida Fish and Wildlife Conservation Commission. According to the report, the boat swamped and capsized while trying to release the anchor from the Gulf bottom. Evidently when the occupants of the boat were unable to get the anchor to release from the Gulf bottom, they tied the anchor line to the portside eye bracket of the transom. Then they proceeded to use the engine to thrust forward in an attempt to release the anchor. This didn’t work and the boat immediately swamped, submerged and capsized.

The investigator concluded that the accident was caused by the improper anchoring of the boat to the portside transom eye bracket, using a 200 hp motor in an attempt to throttle forward trying to release the anchor from the Gulf bottom, and failure to leave enough slack in the anchor line to compensate for the rough Gulf conditions.

This stresses the importance of proper boating safety. Something as simple as using an improper anchoring technique cause the death of three and injury of one other.

The Orlando Sentinel blog can be found by clicking here.

The accident report can be found clicking here.

Other comments on this can be found by clicking here.

Workers fishing for debris from Ike

By Rhiannon Meyers
The Daily News

Clad in muddied coveralls, the commercial fishermen thrust their hands in the murky Galveston Bay water and pulled up a thick length of gray electrical conduit almost as long as a yacht.
It’s not a bad catch for brothers Allen and Michael Lee — shrimpers from Pascagoula, Miss., who’ve come to Galveston County to clean the trash and debris pushed into the bay, bayous and canals by Hurricane Ike.

Click here to read the full article from the Galveston Daily News.

Article in the Houston Chronicle about the trash in Galveston Bay

Here's a link to a Houston Chronicle article about the Ike leftovers in Galveston Bay. More reasons to help with TrashBash 2009.

What: TrashBash 2009
When: March 28, 2009 8:00 AM
Description: Trash Bash is a orgainized effor to clean up the Texas waterways. Since IKE left a mess last Sept., it would be a good time to volunteer if you have the morning available. Below is the info from the Trash Bash website. The web link at the bottom will take you to the info on the Seabrook cleanup effort.

Once a year thousands of volunteers gather along the Texas waterways to do their part in cleaning up the environment and participate in the largest statewide event to educate the public about the importance of our water resources. TimeTrash Bash is a half day event and begins between 8:00/8:30 am in the morning and ends at 1:30 in the afternoon. Start time, registration and end time vary from location to location. Please go to the individual cleanup sites for details.

How to...
To get started, pick a cleanup site near you.

Volunteer at any of the sites and receive:
Free Lunch
Entertainment
Door Prizes
T-Shirts