Father/Son Vacation (The rest of the story) 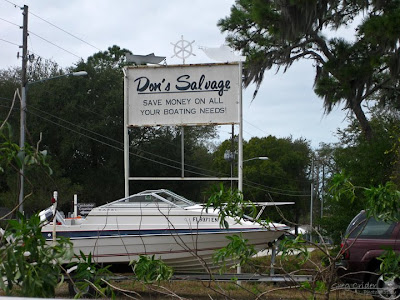 Well after a night’s sleep in Orlando, we found ourselves with some extra time on our hands.  The tour bus wasn’t scheduled to pick us up until 8:30pm so we had a whole day to kill.   Lewis, the guy who is letting me use his lot to store my sailboat while I work on it, told me about a marine salvage yard in Florida.  He said that we should call Don’s Salvage if there was ever anything that we needed to restore my boat and could purchase it new.  Sounded interesting since we were in Florida and had some time, I looked up the location online.  The salvage yard is located in Clearwater (about an hour away) and is open on the first Saturday of every month.  Great!  So we drove over to Clearwater to take a look.

This guy easily had over six acres of boat parts.

We didn’t really find anything that we needed other than a small stainless steel sheet but it did give me an idea of were to call if I need to find an old part.  Back to the hotel we went.  We ate and got ready for the launch.  The launch of Space Shuttle Endeavour STS-130 is a subject all on its own.  To read about it click here to see my post.

After saying up all night two nights in a row, Dad had to get back to work and it was time to head home.  Monday morning after the launch we got back to the hotel at about 6:30am.  We went to bed and slept until 10am.  We checked out of the hotel and got some gas and food and started the long drive home.  We thought that we would drive until we got too tired to go any further.  Fortunately, we didn’t have the rain or traffic problems that we had on the way down and were able to make it all the way to the west side of Mobile before we stopped.  Being the day after the Super Bowl we again saw numerous New Orleans Saints fans returning home.  Here’s a few of the once that we passed on the road.

I’ve always wondered about this bridge on I75 between Ocala and the Florida Turnpike.

For more info go to http://www.dep.state.fl.us/gwt/guide/regions/crossflorida/trails/landbridge.htm  Other than seeing about a thousand patrol cars, the rest of the trip was uneventful until I dropped my camera in a cooler full of melted ice.  Fortunately I was able to get it out and dried off in time to stop it from permanent damage.