The Trawler Beach House: WiFi Adapter For The Boat Revisited

Chuck and Susan have written a couple of good post about WiFi on their boat.   If you are looking to receive a better WiFi signal on your boat, I would recommend reading their post as a part of your research.

The Trawler Beach House: WiFi Adapter For The Boat Revisited

Houston’s NBC station, KPRC Local 2, reported Sunday that Former President George H. W. Bush and Secretary of State James A. Baker helped clean up the beaches on Bolivar over the weekend.    The president was quoted as saying “Texas may be far down on the map but is never down for the count.  Bolivar will come back. Parts of Galveston will be back. Mark my words, they will be better than before.”

First Trip in the New Boat

Normally I sail with my good friend Mark Zimmerman.  We haven’t been able to sail much since Hurricane Ike.  Ike sunk his last boat, Yesterdaze.  (I hope to post some of the details of our sails on Yesterdaze when I get a chance.)  Anyway, Mark has purchased a 37’ Irwin ketch rig named Jus Crew Zen.  Jus Crew Zen needs a new engine and we don’t get  a chance to sail as much as we used to.  The engine is a sore subject with Mark.  Understandably so.  He purchased Jus Crew Zen under the condition that the engine had been rebuild by a mechanic and just needed to be reinstalled on the boat.  While preping the engine to be reinstalled, Mark fired up the engine and it threw a rod permanently damaging the engine block.  He later found out the engine wasn’t rebuilt by a mechanic like advertised.  The guy that rebuilt the engine didn’t correctly tighten the rod bolts causing the failure.  So now he has a boat that he can’t take out and will have to wait until he can afford a new engine before we can do some serious sailing again.

About a week ago, Mark had the idea of getting a tow out to Galveston Bay so that we could take Jus Crew Zen out to see how she handles and what other things would need to be worked on before we start doing some serious sailing.  So on Saturday, April 25, 2009, we did just that.

Close to 11 o’clock Jim Dobins from Barefoot Babe gave us that tow out to the bay.  Mark, Dianne, Matthew, Jason, Korrie, Jennifer and I all got a chance to see how she sails for the first time.  All in all I was expecting to find some major issues that would keep us in port a lot longer than anyone wanted.  I am glad to find out that I was wrong.  The only real thing that will be keeping us in port is the engine.  Sure, we found out that we would need to change some of the rigging and upgrade a few of the older systems, but nothing major.  Once he gets the engine, our biggest concern will be getting use to the ketch rig.  You see we are both use to a sloop rig.  For the non-sailors reading this, a sloop rig is a sailboat with one mast and two sails (one on the mast and one up front).  A ketch rig is a sailboat with two mast with sails on each mast and one or two sails up front.  With the extra sails, we found out that we are going to have to experiment with the sails to find out which sails to raise for the different wind conditions.  Today’s issue was with the mizzen sail.  The mizzen sail (the one on the rear mast) kept us going on a course based on how it was set.  We would try to change course and the mizzen would bring us right back to the course it was set.  I’m going to have to get use to changing the mizzen trim in order to make changes to the course.  Normally I would adjust sail trim as the helmsman was changing course, but it look to me like the mizzen would need to be changed prior to the course change or at least changed first.

Below I’ve included the GPS trip log and some pics from the day.

First Trip In the New Boat

According to a report on Madmariner.com, the signal sent from the scallop boat Lady Mary was regarded as unregistered.  This led to delays in response time while the emergency center controllers waited for additional satellite passes to fix a location.

“Because this situation came to light, we are urging all beacon owners to compare their 15-character identification code printed on the beacon with the registration sticker they receive from NOAA just to ensure they both match,” said Chris Wahler, Marketing Manager for Cobham Life Support, ACR Products. “If there is a discrepancy, we urge the owner to contact NOAA immediately to correct the information.”

For full details read the MadMariner.com article linked below.

Lloyd’s List report that the Stolt tanker vessel “Strength” has been freed.  This is the tanker crew that I talked about in my last post.  They have been captives of the pirates for over six months.   The 23 Filipino crew members are said to be safe and the vessel is proceeding to its next port of call.  There have been over 102 pirate attacks in the first quarter of 2009, according to the International Maritime Bureau.

Thank God that the crew has been returned safely.  Again, while I understand why the American media did not start to report about the pirates until Americans were at risk, but the growing threat of piracy is a threat to the world.  I hope that our government and the other governments of the world will continue to address this issue.

The full article can be found by clicking here.

This evening I had another opportunity to sail with Allen Bates on his J105 “Zippity”.  Allen is the organizer of the Houston Sailing Meetup Group.  He also owns Seabrook’s B Sailing Club.  Allen has been sailing since he was 12 years old.  He is primarily a racer and is very knowledgeable in all the dynamics of sailboat racing.

This is the second trip I have taken with Allen on Zippity.  It is always a blast.  My normal sailing style is cruising so this is a very nice change of pace.  You can learn so much more about sailing when you are on a racing boat that responds quickly to any changes that you make to your sail trim.  Allen is also a very good teacher and freely shares his knowledge with anyone that is willing to listen.

For this trip, we sailed close hauled upwind changing tacks a couple of times until we crossed the Houston Ship Channel.  Once we got to the other side, we tacked and sailed back across the channel.  Once across we sailed a beam to broad reach in order to get the spinnaker ready.   With the kite up, we flew up toward the Houston Yacht Club executing a couple of very good jibes.  I have only had the opportunity to run with a spinnaker a couple of times in the past.  This was definitely the best.  This was the longest time I have had at the helm with the spin up.  Great learning experience and a very pleasant sail.

B Sailing Club is located at http://www.bsailing.com/

While reading the Houston Chronicle on Saturday, April 4th, I saw an article about the Juan Sebastián de Elcano.  The Spanish Navy training ship would be docked at Pier 21 in the Port of Galveston this weekend.  I called my friend Mark and we made the trip to Galveston for a free tour.  It is an amazing sailing ship.  Mark and I both were very impressed with the ship and the way the Spanish Navy has kept her.  The crew is made of some officers and mostly midshipmen training to become officers.  They are at sea for at least 6 months before heading back home to Spain.  The next stop is Columbia.  From there they will travel some more in South America before heading to Cuba, Florida and finally home to Spain.  If you like historic ships or tall ships, she is worth the effort of a tour if she comes to a port near you.

I have included info from wikipedia, the handouts and my pictures below.

Below is an excerpt from Wikipedia about Juan Sebastián de Elcano.

The Juan Sebastián Elcano is a training ship for the Royal Spanish Navy. She is a four-masted topsail, steel-hulled schooner. At 113 metres (370 feet) long, she is the third-largest Tall Ship in the world.

She is named after Spanish explorer Juan Sebastián Elcano, captain of Ferdinand Magellan's last exploratory fleet. The ship also carries the de Elcano coat of arms, which was granted to the family by Emperor Charles I following Elcano's return in 1522 from Magellan's global expedition. The coat of arms is a terraqueous globe with the motto "Primus Circumdedisti Me" (meaning: "First to circumnavigate me").

The Juan Sebastián de Elcano was built in 1927 in Cadiz, Spain, and her hull was designed by the Echevarrieta y Larriñaga shipyard in Cadiz. Her plans were also used twenty-five years later to construct her Chilean sail training vessel sister ship Esmeralda in 1952-1954.

Here is a scan of the information the Spanish Navy was handing out on the tour. 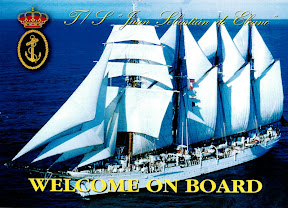 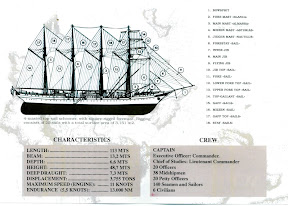 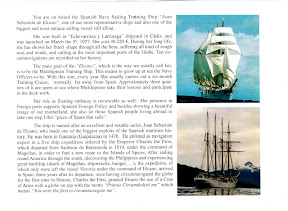 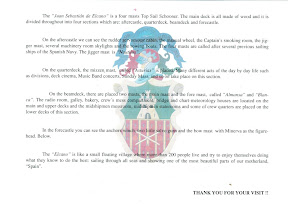