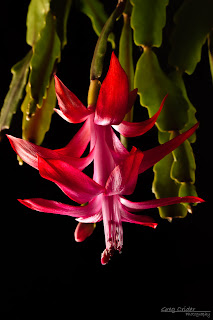 I had a photographer friend of mine ask me how I setup this shot.  This is a Christmas cactus that I brought in the house due to the weather.  While it was inside, it started to bloom.  This is the first bloom that I’ve had in two years.  I shot this with a 50mm lens on my Canon Digital Rebel.  The camera settings were ISO 400, f/22 at 1/400th of sec.  I used a Canon 580EX II on the hot shoe to control an off-camera 430EX flash.  The camera was at 6 o’clock of the flower and the 430EX was at 9 o’clock.  I used a medium-sized Rogue Flash Bender to modify the light on the flash.
The f/22 was used to give me adequate depth-of-field to get all parts of the flower in focus.  I used ISO 400 to get the shutter speed high enough to allow the flash to overpower all the ambient light in the room.  1/400th of a second did that.  Since I was using Canon flashes, I was able to set them to high sync mode to allow the 1/400th of a second shutter speed.  The Rogue Flash Bender served two purposes.  First it made the light source bigger and therefore made the light less harsh.  The second reason I used it was to keep the flash from spilling on the background.  This along with the 1/400th second shutter speed kept the background dark and all the clutter from showing up in the photo.