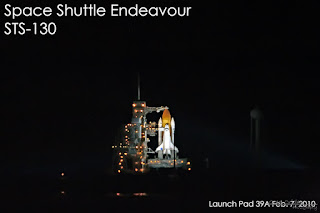 First a little show and tell then I will get to my thoughts and observations about the launch.  The photos in this blog post are from STS-130 that launched on Feb. 7, 2010.

Here is the site of the launch pad from about 12 miles in Titusville, Florida.

Space Shuttle Endeavour as it takes off.

Breaking through the clouds.

A close-up of the space shuttle while in flight.

This is a time-lapsed shot of the first 30 seconds of the launch.
There are a few more photos located on my photography website at http://www.gregcrider.net/events/STS130.

Now on to the more how-to discussion.  First, I want to acknowledge some of the sources that I used when doing research.  I look at a ton of photos in the Internet and Flickr.  Reviewing what other photographers had done before was an invaluable step.  I also came across two other websites the were great help, http://www.launchphotography.com/shuttlelaunchviewing.html and http://www.phototrek.org/travel/STS-93/exposure.html.  I used LensPro To Go to rent some of the camera gear.  I can’t say enough about the excellent service they gave me.  This was the first time I rented gear and they did everything they could to make sure I had what I needed to make the shoot a success.  The service was so good that I have used them again since.  Their web site is http://www.lensprotogo.com.  Of course the Kennedy Space Center Visitor’s Center’s website is a good resource as well.  That address is http://kennedyspacecenter.com/space-shuttle-launch-viewing-tickets.aspx.

I used as a Canon 300D with an 18-55 mm f/3.5-5.6 kit lens for the time-lapsed shot and a Canon Rebel XT with 500mm f/4L and a 1.4 teleconverter on a gimbal head for the launch photos.  The closest public viewing site is still six miles away from the launch pad.  You should get the longest telephoto lens that you can.  I rented the 500mm and 1.4 teleconverter and was glad that I did.  With the heavier telephoto lenses, make sure you have a tripod and head that can support the weight of the gear.  The gimbal head made it easy to balance the lens and pan with the shuttle as it launched.  If you get to shoot a night launch, take a second body with a wide-angle lens for light-trail or time-lapsed photography.  A remote shutter release is a must for both day and night launches.  Take clothing appropriate for the climate.  To get a good location, you will need to find your spot several hours ahead of time.  Keep that in mind.  Make sure you have water and snacks because most of your time will be spent waiting.  Umbrella-style lawn chairs are also a big help.

As far as settings and setup goes, it is important to pre-focus your lens and set it to manual mode once you have done so.  With all the steam and movement, your autofocus will not be able to keep up and you will miss the shot.  For a day launch, I would use ISO 100 or 200 whichever is the lowest for your camera that doesn’t cost you dynamic range.  Take a meter reading during the T minus 9 minute hold.  Switch your camera to manual mode and use the settings that you got from your meter reading.  Adjust your ISO and f-stop so that your shutter speed stays above 1/125 of a second.  Since the Florida coast can be hazy, use a polarizer during a day launch if you have it.  Use remote shutter release to eliminate camera shake.  I would also shoot in RAW.  It give you the most flexibility to adjust in post for any exposure issues that you might have.  Set the white balance for daylight.  The light from the rockets will give the auto white balance fits.
For the night launches, I would use the manual exposure mode.  Set your camera to ISO 400, f/8 at 1/125 sec for clear night.  The STS-130 launch was very cloudy causing some of the light from the rockets to reflect back downward so I used a shutter speed of 1/200 sec. For light trail or time-lapsed shots, use ISO 100 at f/22 and bulb for the shutter speed.  Leave the shutter open for 3 to 5 minutes.  If it is overcast or the moon is out, you will need to decrease your shutter time.  The time lapsed shot above was shot at 30 seconds.  Since the cloud cover was so thick and low, a light trail shot was out.  The clouds would reflect too much light back into the frame.  Shoot with the white balance set to tungsten.  Use RAW mode to give you the most flexibility in post.  And, use a remote shutter to avoid camera shake.


View Shuttle Launch Viewing Sites in a larger map
Finding the right location to take the photos from is also important.  The NASA Causeway in my opinion will give you the best unobstructed view to photograph the launch.  It is 6 miles from the launch pad and is the closest the general public can get to the launch.  It also gives you a frontal view of the shuttle.  The downside is that you must get on a lottery list for the chance to purchase a ticket.  For the STS-130 launch, they sold 1000 tickets at $56 each.  I didn’t make the lottery so I was able to purchase a ticket from one of the local tour companies for $115.  The ticket gives you two days access to the Kennedy Space Center Visitor’s Complex and one trip to the causeway.  If the launch cancels after you have been transported to the causeway, you will need to purchase another causeway ticket.  More information about the cancelation policies can be found on the Kennedy Space Center’s website.  It also gets very crowded.  According to the people at NASA, normal launch crowds are the 1000 tickets they sell plus 10 bus loads from the tour companies.  During STS-130, there were the 1000 tickets and 37 bus loads of people.  Be prepared.  They will take you out to the causeway a couple of hours before the launch, so umbrella style lawn chairs are recommended.  The tour bus picked us up at 8pm for 4:30am launch.  Once there you can’t leave until the launch is over or it has been cancelled so take anything you will need that you can personally carry.  You will have to clear security so make sure you check allowed/not allowed list of things you can bring.
The first attempt of the STS-130 launch was cancelled due to weather.  I didn’t get cancelled until after we were at the causeway so I had a choice to make.  Pay for another causeway ticket when there was a 60% chance that the weather was going to cancel the launch again the next way or go to option 2.  I used option 2.  The second-best option is Space View Park.  It is a public park on the river in Titusville.  It is about 12 miles from the launch site.  You get a profile view of the launch.  It’s free.  There is a Burger King, Papa Johns and CVS within walking distance from the park.  You also have the Astronaut Walk of Fame to view and photograph.  You will also want to get here early.  The earlier you get there the better the spot and parking.  For STS-130 2nd attempt, we got there 12 hours before the launch and there were already 10 people there.
The third option is on the river bank, anywhere on US 1 from Garden St. to US 50 offers a clear view of the launch pad.  Most of the river bank is private property.  Some won’t let you use their property others will charge you $10 to $30 per car.  This price may go up since there are only two launches left.  My advice is the same as the previous two locations.  Get there early and take what you need to be comfortable.
Photographing the shuttle launch was definitely a highlight in my life.  I would do it again but don’t know if I will be able to make it to one of the last two launches.  I hope this has given you some insight into my thought process for the launch.  If you have a question, please comment and I’ll try to answer it.