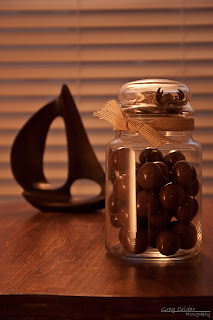 One of the ladies at the office gave me a candy jar of chocolate for fixing her home computer the other day.  The jar was sitting on my desk at work next to a metal sailboat statue.  As I was working today, I kept coming back to the fact that the colors of the chocolate and the sailboat were very similar and that it might make a good image.  I wanted to practice with my Speedlites and accessories anyway.  Here is my process to get the final shot.

First I wanted to deal with the mood and coloring of the shot.  All light varies in color.  Our brains compensates automatically for these variances in coloring.  Whites always seem white when you look at them.  Digital cameras try to do this too by way of the White Balance function.  You can leave the camera in auto white balance mode and the camera will try to compensate for the color of the light to make the whites white.  If you set the white balance for yourself you can make some changes to the mood and coloring of the scene.  For instance, below is the candy jar with the color balance set to tungsten (normal light bulb) even though I’m not using any indoor lighting.  I’m just using the sunlight coming in the window.  Light from a light bulb has more red that sunlight.  Since the camera is expecting the light to be from a lamp, it is adding blue to the picture to compensate for the extra red that is suppose to be coming from a lamp.  Without the lamp, the photo turns blue.

Here is the scene with the color balance set to the shade setting.  Notice how the colors are now normal.  This is where I want to start with the shot.  I’m using my Canon 300D set to Aperture Priority with an f-stop of 5.6 ambient light only.

For the next adjustment, I noticed that the camera was still set to ISO 800 from the previous day.  I changed that to ISO 200.  The ambient light is a little brighter than I wanted so I added an exposure adjustment of –1.  I didn’t like the horizontal composition so I switched to vertical.

Better.  Now it is time to add the first flash.  On the camera I have a Canon 580EX II set to ETTL commander mode.  (It not adding light to the image.  It is only telling the other flash what to do.)  On a light stand to the right of the image, I have a 430EX with a full CTO gel.  Gels are a way to change the color of the light coming from your flash.  They are just sheets of colored plastic that are made to a very specific color.  A CTO gel is used to change a daylight balanced flash to the color temperature of a normal light bulb.  Since the camera is expecting the color temperature of light from under a shade, the gel will add some warmth to the image.

The light from the flash is not as bright as I wanted so I added +1 to the flash compensation.

Looking at the photo, I wanted the sailboat to have a softer focus so that your attention is on the candy jar.  To do this I simply increased the distance between the jar and the sailboat.

The shadows that the flash created were too harsh.  I added a white shoot-through umbrella to the 430EX flash.

Adding the umbrella cost me some of my light that was reflected back on to the jar.  To compensate I took the 580EX II out of commander mode.  I didn’t add the CTO gel here.  See how the mood and color of the image changes.

I added a CTO gel to the 580 to get the color temperature back to were I wanted it.

I don’t like the reflection that was created when I added the 580 flash, so I’m experimenting with the flash position in the next few shots.

I like the position of the flash in the last shot.  The flash head is now pointed into the 5-in-1 reflector and reflecting onto the jar.  These changes increased the flash brightness more than I wanted so I changed the flash compensation from +1 to +2/3.

I’m almost there with the lighting.  The last change darkened the background a little too much so I changed the exposure compensation to –2/3.

Up until this point I have been working with the flashes in ETTL mode.  ETTL mode is Canon’s automated way to set the flash output.  I thought that I should switch the flashes to manual mode and practice using them in manual mode.  The first image is from when I first turned the flash to manual.  I didn’t realize that aperture priority mode didn’t work with the flash in manual so I switched the camera to manual too.  The second shot is f5.6 at 1/8 of a second.  The 430 is set to 1/16th power and the 580 is set at 1/32nd power.  That wasn’t enough so I bumped the flashes to 1/8th and 1/16th which to me is just about the same as the ETTL shot.

The last thing that I want to change is the position of the 430 flash.  The sailboat’s shadow is caused from the window light and is coming straight for the camera.  The shadow from the jar is cause by the flash and is going from right to left.  I wanted direction of the shadows to be the same so I put the 430 on a boom and moved it behind and above the sailboat.

Moving the flash left me with a small bright spot at the top of the frame.  I raised the flash a couple of inches.  I also moved the sailboat a little to the left.  Here is the final shot.

Here is the layout.

Thanks for reading.  I hope you got something from my thought process.